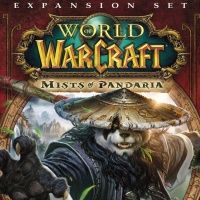 World of Warcraft: Mists of Pandaria

Heart Of Pandaria
World of Warcraft: Mists of Pandaria
Jeremy Soule
Pandaria is a new continent located to the south of the Eastern Kingdoms and Kalimdor. Several zones have been added, including the Jade Forest, Valley of the Four Winds, Vale of Eternal Blossoms, Townlong Steppes, Kun-Lai Summit, Krasarang Wilds, the Timeless Isle, and the Dread Wastes. The Jade Forest is the first zone, and the entry point for the Alliance and Horde. It features lush rainforest and stone spires, and introduces the player to the hozen and jinyu races. It contains the Temple of the Jade Serpent (one of the new dungeons), and introduces the Sha enemy. The Valley of the Four Winds includes pandaren farm lands, with a coastal jungle. The Stormstout Brewery, another new dungeon, is located in the valley. There are auction houses scattered across the five zones of Pandaria. Along with these normal auction houses, a "black market" auction house is located in an area north of the Valley of the Four Winds called the Veiled Stair. Unlike the player controlled auction house, this auction house is controlled by NPCs who post items, usually of rare status or those that have been removed from the game in previous expansions. Both Horde and Alliance can use the black market auction house. As you travel throughout Pandaria it will be common to encounter Lorewalker Cho who is searching Pandaria for the various secrets and lore that the land possess. Once the player hits level 90 and travels into the Vale of Eternal Blossoms, the player can talk to Lorewalker Cho and his team of Lorewalkers. The player will be tasked with seeking out the "Lore objects" scattered about Pandaria in order to gain more reputation.

The Wandering Isle is a new zone, serving as the starting area for pandaren players, which they leave after choosing a faction (horde or alliance). The Isle itself is in fact a roaming giant sea turtle named Shen-zin Su. The turtle's origins lie with the pandaren explorer Liu Lang, who was overcome with wanderlust, a rare trait in the pandaren of that time. Because of this he departed the pandaren continent of Pandaria around 10,000 years ago, riding on the back of the then man-sized turtle, Shen-zin Su. Lui Lang later returned to his homeland a few times, and each time the turtle had become progressively bigger. By the time players encounter Shen-zin Su, the turtle has grown to the size of a small continent, complete with fertile farmlands, mountains, lakes and a thriving population of pandaren, animals and plant life. In addition to serving as a home and method of transportation for his inhabitants, Shen-zin Su is a fully sapient being and quite aware of the Wandering Isle pandaren that have been living on his back for generations. The zone also features a training academy and a central temple.

Pandaria plays host to several new races that the players will encounter. Besides the pandaren there are the jinyu, a wise, fish-like race, the passionate, monkey-like hozen, the yaungol, fierce ancestors of the tauren, the virmen, a pesky rabbit-like race, the grummels, a friendly race related to troggs, the highly aggressive reptilian sauroks, and the mantids, a fearsome insectoid race. Players will also encounter the mogu, who were the first to inhabit and conquer Pandaria, and the Sha, who are "the manifestation of negative energy on Pandaria".
with social network
with social network