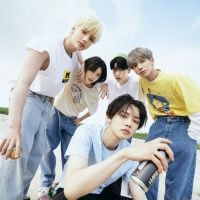 Your Light
Live On
TOMORROW X TOGETHER

Run Away
The Dream Chapter: Magic
TOMORROW X TOGETHER

What If I Had Been That PUMA
The Chaos Chapter: FREEZE
TOMORROW X TOGETHER

0X1=LOVESONG (I Know I Love You)
The Chaos Chapter: FREEZE
TOMORROW X TOGETHER

LOSER=LOVER
The Chaos Chapter: FIGHT OR ESCAPE
TOMORROW X TOGETHER

Maze in the Mirror
The Dream Chapter: Eternity
TOMORROW X TOGETHER

9 and Three Quarters
The Dream Chapter: Magic
TOMORROW X TOGETHER 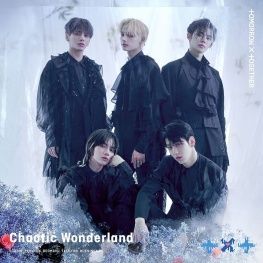 Chaotic Wonderland
23
Doom at Your Service
24 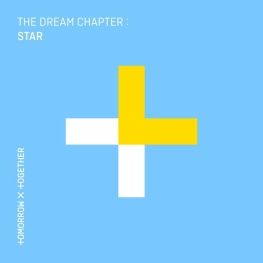 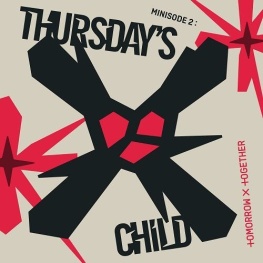 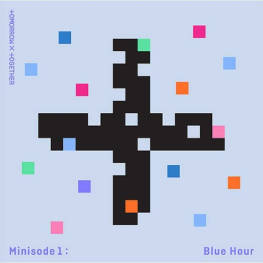 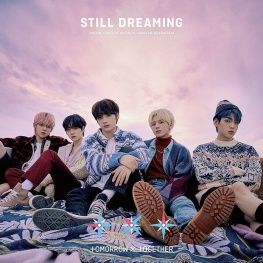 The Chaos Chapter: FIGHT OR ESCAPE
23 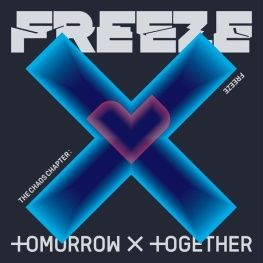 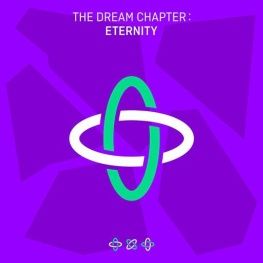 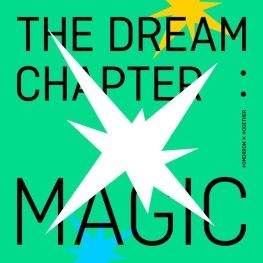 They debuted on March 4, 2019 with the EP The Dream Chapter: Star. The album debuted and peaked at number one on the Gaon Album Chart and Billboard World Albums Chart and entered the US Billboard 200 at number 140, at the time becoming the highest-charting debut album by any male K-pop group. The album's lead single "Crown" debuted atop the World Digital Songs with TXT topping the Billboard Emerging Artists Chart, making them the fastest K-Pop group to appear in World Digital Songs and the second fastest K-Pop group to appear in the Billboard Emerging Artist.

TXT is an acronym standing for "Tomorrow X Together". In Korean, the group name is "투모로우바이투게더 (RR: Tumoroubaitugedeo)", read as "Tomorrow By Together" and transliterated into Hangul. They do not have a separate Korean version of their name. According to their website, the meaning behind "Tomorrow by Together" is five individuals who "come together under one dream in hopes of building a better tomorrow".

In their first ever interview with MBC's "Section TV", the group mentioned that they prefer being referred to by their full name instead of their initials.
History
Pre-debut

Plans for a second boy group from Big Hit Entertainment were announced by founder Bang Si-hyuk as early as 2017 and a date for early 2019 set in November 2018. TXT was officially revealed on January 10, 2019. Over the next ten days, YouTube videos depicting each member, dubbed "introduction films," were released.
2019: Debut and The Dream Chapter: Magic

TXT was the first boy band to debut under Big Hit Entertainment in six years after BTS. A debut broadcast for the group was aired on Mnet and its YouTube page, and it was announced along with the band's debut extended play, The Dream Chapter: Star, which was released on March 4. A debut showcase was held at the Yes24 Live Hall on March 5. Following the release of the EP, the music video of the album's lead single, "Crown" garnered 14.5 million views on YouTube, breaking the record for the most viewed K-Pop debut music video within 24 hours for a boy group and the most liked K-pop debut music video with 2.3 Million likes in 24 hours . The album debuted atop the Gaon Album Chart and Billboard World Albums Chart while "Crown" debuted at number one on the Billboard World Digital Songs Chart. The group debuted at No. 1 on the Billboard Emerging Artists and at No. 140 on the Billboard 200 chart for the first time, making them the fastest to appear in these charts (the second fastest K-Pop group to appear in the Billboard Emerging Artist) and highest-charting debut album by any male K-pop group. The album also ranked number 3 on Oricon's Weekly Album Chart. Additionally, the album went onto top the Gaon Monthly Album Chart for the month of March. TXT's first music show performance was aired on March 7, 2019 on Mnet's M Countdown. They earned their first ever music show win on SBS MTV's The Show with the single "Crown" just after a week of their debut. This was soon followed by wins on M Countdown and Show Champion. "Crown" made it on to GQ's Decade-end list of "The game-changers from a decade of K-pop", for the year 2019, with GQ writing, "The bright, effervescent pop of TXT who, are in their own element as they playfully explore teenage growing pains."

On April 9, 2019, TXT announced their first-ever overseas tour, a six-show debut showcase in the United States encompassing six American cities- New York City, Chicago, Los Angeles, Dallas, Orlando, and Atlanta over the course of about two weeks, from May 9 to 24. Tickets to all shows were sold out in less than 24 hours. Following their showcase in May, TXT performed at the 2019 iHeartRadio Wango Tango music concert held at Dignity Health Sports Park in Los Angeles on June 1. On June 20, the group announced that they would be performing in two of Japan's largest fashion festivals- Kansai Collection's Autumn/Winter 2019 runway show on August 27, followed by the famous Tokyo Girls Collection's Autumn/Winter 2019 show on September 7, making TXT the first Korean artist ever to perform at both shows during the same season. On July 6, TXT performed at KCON 2019 NY music festival held at Madison Square Garden, New York, in front of 55,000 spectators. Later that month, TXT received their first ever MTV Video Music Award nomination in the category of "Best K-pop."

On August 8, 2019, it was announced by Big Hit Entertainment that they originally had planned to release a new album in August but due to members Soobin being diagnosed with infectious conjunctivitis and Yeonjun affected by back pains, it was then postponed to September. On August 20, Big Hit revealed members Taehyun and Huening Kai had also been diagnosed with conjunctivitis, thus a reschedule of the album "has become unavoidable", citing the change in release date from September to October.

On October 21, 2019, TXT released their first studio album, titled, The Dream Chapter: Magic, with "9 and Three Quarters (Run Away)" as its lead single. Musically, the album incorporates a variety of different music genres, including R&B, tropical house, acoustic pop and hip hop. Commercially, the album debuted atop the Gaon Album Chart, surpassing 124,000 sales in its first week. This marked the group's second chart-topping album following their EP The Dream Chapter: Star. The album debuted at No. 3 on Billboard's World Albums Chart and at No. 6 on the Heatseeker's Album Chart. A total of four tracks from the album entered the Billboard World Digital Songs chart with the lead single "9 and Three Quarters (Run Away)" debuting at No. 2. Billboard and Dazed both later named “9 and Three Quarters (Run Away)” one of the best K-pop songs of the year.

On January 15, 2020, TXT made their Japanese debut with the single "Magic Hour", which includes the Japanese versions of their songs "Run Away", "Crown", and "Angel or Devil". The single debuted at number one on the Oricon daily chart and at number two on the Oricon Weekly Singles Chart. On January 19, the group's Japanese television debut was announced with their first-ever appearance on TV Asahi's Music Station. They performed the Japanese version of "Run Away" on January 24; they are the first Korean artist to perform on the show in 2020. "Magic Hour" was certified gold by the Recording Industry Association of Japan (RIAJ) for selling 100,000 units.

On April 28, Big Hit Entertainment announced the release date of TXT's second EP, titled The Dream Chapter: Eternity, as May 18, with the lead single "Can't You See Me?". Commercially, the album sold over 181,000 units in its first week, and entered the Gaon Album Chart at number two. It debuted at number one on the Oricon Albums Chart, becoming the band's first chart-topper in Japan. In July 2020, the album received a platinum certification from the Korea Music Content Association (KMCA), denoting 250,000 shipments, giving TXT their first certification in the country since debut. Two months later, The Dream Chapter: Star and The Dream Chapter: Magic were also certified platinum by the KMCA.

On July 20, 2020, it was announced that TXT's leader, Choi Soobin, would be the new MC of KBS2's Music Bank with Oh My Girl's Arin. His first broadcast as the MC was on July 24, 2020, and his final on October 1, 2021. On August 19, 2020, TXT released their second Japanese single "Drama". The single album included Japanese versions of "Drama" and "Can't You See Me?", as well as their first original Japanese song "Everlasting Shine". "Everlasting Shine" serves as the twelfth opening theme of the anime Black Clover, which began airing on September 1. "Drama" debuted and peaked at number three on the Japanese Oricon Singles Chart, and was certified gold by the RIAJ.

TXT released their third EP Minisode1: Blue Hour, with the lead single "Blue Hour" on October 26. The album debuted at number three on the Gaon Album Chart, selling over 300,000 copies in its first week. In the United States, the EP debuted at number 25 on the Billboard 200 chart, it was the top-selling album of that week. The album simultaneously claimed the top spot on the Billboard World Albums chart with TXT topping the Emerging Artists chart. It also entered the Oricon Albums Chart at number one, becoming their second chart-topper in Japan. It was certified platinum by the KMCA. The band released an original soundtrack titled "Your Light" for the JTBC teen-drama Live On on November 24.
2021: Still Dreaming, The Chaos Chapter, and Chaotic Wonderland

Their debut Japanese studio album Still Dreaming was released on January 20, 2021. The album included the original Japanese song "Force" that serves as the opening theme for the second season of anime World Trigger. Still Dreaming debuted and peaked at number one on the Japanese Oricon Albums Chart and was certified gold by the RIAJ. This album charted at number 173 on the Billboard 200 making TXT the second Korean band in history to chart an album in Japanese on the American music chart. In April 2021, Minisode1: Blue Hour was certified Double Platinum by the KMCA, indicating 500,000 shipments.

On April 22, 2021, Big Hit Music announced that TXT would make a comeback at the end of May. TXT released their second studio album, The Chaos Chapter: Freeze on May 31, with the lead single "0X1=Lovesong (I Know I Love You)", featuring Seori. On May 7, it was announced that the album pre-orders had surpassed 520,000 copies in six days. On May 31, before the official release of the album, pre-orders increased to over 700,000 copies, doubling from their last release. The Chaos Chapter: Freeze debuted at number 5 on the Billboard 200 chart, becoming the band's highest-charting album in the United States, as well as being the top selling album that week and it also peaked at number 1 on the Oricon Albums Chart, becoming TXT's fourth consecutive chart-topper in Japan. On May 24, the band released the original soundtrack "Love Sight" for the tvN drama Doom At Your Service. On June 25, TXT released a remix of "0X1=Lovesong (I Know I Love You)" featuring pH-1, Woodie Gochild and Seori. In July, The Chaos Chapter: Freeze was certified Gold by the RIAJ making it TXT's first Korean release with a certification in Japan. In August, the album was certified Triple Platinum by the KMCA, indicating 750,000 shipments.

The band released The Chaos Chapter: Fight or Escape, a repackaged version of The Chaos Chapter: Freeze, and its lead single "LO$ER=LOVER" on August 17, 2021. On October 3, 2021, the group held their first full-length concert since debut, entitled ACT:BOY. The concert ran for approximately 150 minutes, featured 25 songs, and was streamed through online platform VenewLive to a total of 126 countries. On October 5, 2021, it was announced that from October 25–31, each member would take a turn guest DJ-ing on KBS Cool FM's Kiss the Radio following previous DJ Young K's military enlistment, hosting "Tomorrow x Together week" to 'showcase their unique charms.'

On November 24, 2021, TXT was awarded '2021 Men of the Year Pop Icon Award' by GQ Japan. Wrapping up 2021, the group was featured on the cover of Euphoria Magazine where they spoke to Aedan Juvet about being named the "It group" of the fourth generation.
2022–present: Minisode 2: Thursday's Child

On January 17, 2022, a new fictional webtoon about TXT was released, entitled "The Star Seekers".

On April 6, 2022, Big Hit Music announced that TXT would make a comeback at early May. The group will release their fourth EP Minisode 2: Thursday's Child on May 9, 2022. On April 20, 2022, pre-orders surpassed 810,000 copies six days after it was announced.
with social network
with social network