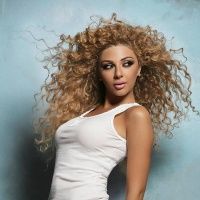 Personal life
Fares, born in Kfar Chellal, Sidon District to a Maronite Christian family, married a Lebanese-American businessman Danny Mitri in a Cyprus ceremony in August 2014. They have two boys born in February 2016 and October 2020.

Controversy
Myriam has often been criticized for her "provocative" style of entertainment, especially her choice of wardrobe, and hair style, creating accusations of imitating Colombian pop star Shakira.

Cyber attack
In 2015, she was amongst several famous Christian celebrities within the Arab world targeted by extremist cyber trolls for celebrating Easter. In an interview with Nishan, she stated that she was a supporter of civil marriage and was not against interfaith relationships.
with social network
with social network