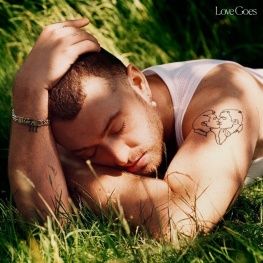 Love Goes
134
Damini Ebunoluwa Ogulu MFR (born 2 July 1991), known professionally as Burna Boy, is a Nigerian singer, songwriter and record producer. He rose to stardom in 2012 after releasing "Like to Party", the lead single from his debut studio album, L.I.F.E (2013). In 2017, Burna Boy signed with Bad Habit/Atlantic Records in the United States and Warner Music Group internationally. His third studio album, Outside, marked his major-label debut.

In 2019, he won Best International Act at the 2019 BET Awards, and was announced as an Apple Music Up Next artist. His fourth studio album, African Giant, was released in July 2019 and won Album of the Year at the 2019 All Africa Music Awards and was nominated for a Best World Music Album at the 62nd Annual Grammy Awards. He was awarded the African Artist of the year at the 2020 VGMA's. Burna Boy released his fifth studio album, Twice as Tall, in August 2020, which was nominated for the same category at the 63rd Annual Grammy Awards, making him the first Nigerian artist with back-to-back nominations at the Grammys. In 2021, Twice as Tall won the Best World Music Album at the 63rd Annual Grammy Awards.

In July 2022, Burna Boy released his sixth studio album, Love, Damini which also became the highest debut of an African album on Billboard, Netherlands, the United Kingdom and France. In October, Burna Boy was given the award of Member of the Order of the Federal Republic for his achievements in music.

Early life
Damini Ebunoluwa Ogulu was born in Port Harcourt, Rivers State, Nigeria. His mother, Bose Ogulu, worked as a language translator and his father, Samuel, managed a welding company. His maternal grandfather, Benson Idonije, once managed Nigerian multi-instrumentalist Fela Kuti. His mother later became his manager. Ogulu grew up in southern Nigeria and began making his own beats using FL Studio. He attended Corona Secondary School in Agbara (Ogun State) and relocated to London to further his studies. He later studied media technology at the University of Sussex from 2008 to 2009, then studied media communications and culture at Oxford Brookes University from 2009 to 2010. He then returned to Port Harcourt and took up a year-long internship at Rhythm 93.7 FM. He launched his music career after returning to Lagos.

Career
2012–2015: L.I.F.E and On a Spaceship
Burna Boy's debut studio album, L.I.F.E, was released on 12 August 2013, serving as the follow-up to his second mixtape Burn Identity (2011). The album sold 40,000 copies on the first day of its release. Aristokrat Records later sold its marketing rights to Uba Pacific for ₦10 million. The album's release was preceded by five singles: "Like to Party", "Tonight", "Always Love You", "Run My Race", and "Yawa Dey". L.I.F.E was produced entirely by Leriq and features guest appearances from 2face Idibia, M.I, Timaya, Olamide, Reminisce, and Wizkid, alongside others. Nigeria Entertainment Today ranked the album 10th on its list of the 12th Best Albums of 2013. The album's music was inspired by Fela Kuti, King Sunny Ade, and Bob Marley. It received generally positive reviews from music critics, who applauded its production. It was nominated for Best Album of the Year at the 2014 Nigeria Entertainment Awards. In August 2013, L.I.F.E peaked at number seven on the Billboard Reggae Albums chart.

In 2014, Burna Boy split from Aristokrat Records. In February 2015, he founded the record label Spaceship Entertainment eight months after parting ways with Aristocrat Records. Burna Boy released his second studio album, On a Spaceship, on 25 November 2015. His seven-track debut extended play, Redemption, was released in September 2016. Its lead single, "Pree Me", debuted on Noisey.

2018: Outside
On 19 January 2018, Burna Boy was featured on American rock band Fall Out Boy's song, "Sunshine Riptide", a track from their seventh studio album, Mania. He released his third studio album, Outside, exactly a week later, on 26 January 2018. Described as a mixtape, Outside consists mostly of afrobeats, dancehall, reggae, and road rap. It features guest appearances from J Hus, Lily Allen, and Mabel. Outside was supported by six singles: "Rock Your Body", "Streets of Africa", "Koni Baje", "Sekkle Down", "Heaven's Gate" and "Ye". Its production was handled by Leriq, Baba Stiltz, Jae 5, Juls, Chopstix, Steel Banglez, Fred Gibson, Phantom, and FTSE. The album received positive critical acclaim and was ranked by Pulse Nigeria and Nigerian Entertainment Today as the best Nigerian album of 2018. It won Album of the Year at the 2018 Nigeria Entertainment Awards. In February 2018, Outside debuted at number three on the Billboard Reggae Albums chart. A single from the album, "Ye", ended up atop most Nigerian publications year-end list as the biggest song of 2018.

On 7 October 2018, Burna Boy performed before a sold-out crowd at London's O2 Academy Brixton. A day prior to the show, he held a pop-up event at Red by Little Farm and sold limited boxes of his Space Puffs cereal, as well as custom notepads, lighters and graphic tee-shirts. On 9 October 2018, Burna Boy was announced as one of Spotify's New Afro Hub Takeover Artist. The announcement coincided with him being named YouTube's Artist on the Rise for 3 months.

On 24 June 2019, Burna Boy won Best International Act at the 2019 BET Awards. In July 2019, Burna Boy was announced as an Apple Music Up Next artist. His inclusion into the program was accompanied by a Beats 1 interview with Julie Adenuga and a short documentary. He recorded "Ja Ara E" (Yoruba: "wise up" or "use your head") for Beyoncé's The Lion King: The Gift and was the only guest artist with their own track on the soundtrack album.

Burna Boy's fourth studio album, African Giant, was released on 26 July 2019. It was supported by six singles: "Gbona", "On the Low", Killin Dem", "Dangote", "Anybody" and "Pull Up". He began recording the album in 2018 and told Billboard that it is his most personal project yet. He first revealed plans to release it in April 2019 and held a private listening session in Los Angeles. Photos and videos from the listening session were shared on social media. African Giant was initially announced as a 16-track album. To promote the album, Burna Boy headlined the African Giant Returns tour, the second leg of his African Giant tour. Burna Boy recorded "My Money, My Baby", a track that appeared on Queen & Slim's soundtrack album. Described as an "Afrobeat-tinged track", "My Money, My Baby" contains a sample of Fela Kuti's 1972 song "Shakara". On 22 November 2019, Burna Boy was featured alongside English singer-songwriter Ed Sheeran on British rapper Stormzy's single, "Own It", the fourth single from his second studio album, Heavy Is the Head. In November 2019, he became the first Afrobeat artist to sell out the SSE Arena( formerly known as the Wembley arena). He was given a special plaque to mark his achievement.

2020–2021: Twice as Tall
In April 2020, Burna Boy performed in the One World: Together at Home special. On 19 June 2020, Burna Boy was featured on the remix of South African producer Master KG's viral song "Jerusalema". Burna Boy used his signature afrobeats style on the song and also partly sings in the isiZulu language. On 30 July 2020, Burna Boy was featured on British singer Sam Smith's single, "My Oasis", the lead single from their third studio album, Love Goes. His fifth studio album, Twice as Tall, was released on 14 August 2020. It was executive produced by Diddy and his mother, Bose Ogulu. The album became his highest-charting project, debuting at number one on the Billboard World Albums Chart. On 24 November 2020, Twice as Tall was nominated under the World Music Album category in the 63rd Annual Grammy Awards alongside other entertainers like Antibalas, Bebel Gilberto, Anoushka Shankar and Tianariwen. It was the second consecutive year that Burna Boy received a nomination in the category. He won an Edison Award in the World Album category for African Giant, and the Best International Act at the MOBO Awards on 9 December, shaking off competition from Drake, Megan Thee Stallion, Lil Baby and Roddy Ricch. At the 63rd Annual Grammy Awards held on 15 March 2021, he won the Grammy for Best Global Music album. Burna Boy's song, "Destiny" was included in the playlist at the inauguration of Joe Biden. He added another achievement to his repertoire at the BET Awards 2021 where he won the Best International Act. With this win, he became the first African artiste to bag three nominations and wins consecutively, having won the BET Award in 2019, 2020 and now in 2021.

On 19 March 2021, Burna Boy was featured on Canadian singer Justin Bieber's song, "Loved by You", a track from his sixth studio album, Justice. On 17 September 2021, he was featured on American singer-songwriter Jon Bellion's single, "I Feel It", which marks the first musical collaboration between the two, but the latter co-wrote "Loved by You" with Justin Bieber. On 4 June 2022, Burna Boy performed at the Belgravia Sports Stadium in Harare, Zimbabwe where he was allegedly offered, and twice refused, large sums of money to don a ZANU-PF scarf as an endorsement of the Mnangagwa administration.

2022: Love, Damini
Burna Boy released his sixth studio album, Love, Damini, on 8 July 2022. Two singles preceded the album: "Kilometre" was released as an independent single on 29 April 2021, and "Last Last" was released on 13 May 2022 along with the announcement of the album.

2022 club shooting
On 8 June 2022, his armed escorts allegedly shot and wounded two people at a nightclub in Lagos. According to the wife of one of the victims, the incident began after she declined Burna Boy's invitation to join him at the club's VIP section. Five security guards affiliated with Burna Boy were arrested and charged with attempted murder. The woman later accused Burna Boy and his family of trying to silence her family with hush money. As of June 20, CCTV footage of the shooting had not yet been released by the club.