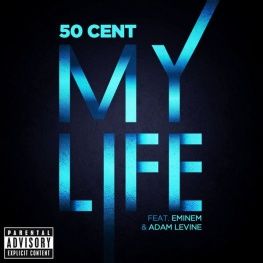 My Life
104
Adam Noah Levine (/ləˈviːn/; born March 18, 1979) is an American singer and songwriter. He serves as the lead vocalist and rhythm guitarist of the pop rock band Maroon 5. Levine began his musical career in 1994 with the band Kara's Flowers, of which he was the lead vocalist and lead guitarist. After the commercial failure of their only album, The Fourth World, the group was reformed in 2001 as Maroon 5 – with James Valentine replacing him as lead guitarist. In 2002, they released their first album, Songs About Jane, which went multi-platinum in the US; since then, they have released six more albums: It Won't Be Soon Before Long (2007), Hands All Over (2010), Overexposed (2012), V (pronounced: "five") (2014), Red Pill Blues (2017), and Jordi (2021). As part of Maroon 5, Levine has received multiple accolades, including three Grammy Awards.

From 2011 to 2019, Levine was a coach on NBC's reality talent show The Voice. The winners of the seasons (1, 5, and 9) belonged to his team. In 2012, Levine made his acting debut as the recurring character Leo Morrison in the second season of the television series American Horror Story. He also appeared in the films Begin Again (2013), Popstar: Never Stop Never Stopping (2016), Fun Mom Dinner and The Clapper (both 2017). Levine launched his eponymous fragrance line in 2013. The same year, he collaborated with Kmart and ShopYourWay.com to develop his menswear collection. He also owns a record label, 222 Records, and a production company, 222 Productions, which produced television shows Sugar and Songland. In 2013, The Hollywood Reporter reported that "sources familiar with his many business dealings" estimated Levine would earn more than $35 million that year.

Early life
Adam Noah Levine was born in Los Angeles to Fredric Levine, the founder of retail chain M. Fredric, and Patsy (née Noah) Levine, an admissions counselor. They divorced when he was seven and Levine underwent therapy. Growing up, he spent weekdays with his mother and weekends with his father. He has a brother Michael, two half-siblings—Sam and Liza Levine—and step-sister Julia Bartolf Milne. Levine's father and maternal grandfather were Jewish, while his maternal grandmother was a Protestant. Levine considers himself Jewish; however, according to The Jewish Chronicle, he is spiritual but not religious. He chose not to have a Bar Mitzvah as a child because of the custom of receiving Bar Mitzvah gifts, explaining: "I felt as though a lot of kids were trying to cash in ... I just don't think it's the most respectful way to deal with God and beliefs and years and years and years of cultural heritage." Levine is a nephew of journalist and author Timothy Noah, and television producer and writer Peter Noah.

Levine describes his family as "very musical" and credits his mother with "start me out on the path." He also attributes his mother's idols – Simon & Garfunkel, Fleetwood Mac, and The Beatles – to shaping his musical style, calling them "a huge part of my upbringing". Levine attended Brentwood School, where he met Jesse Carmichael and Mickey Madden, his future bandmates. He carried his musical interests to high school, where he states he was "a little rebellious. I didn't want to do the things they were teaching me ... consumed my every thought."

Kara's Flowers
In February 1994, Levine, along with friends Jesse Carmichael, Mickey Madden, and Ryan Dusick formed garage band Kara's Flowers. In 1995, the group played their first gig at the Whisky a Go Go, a nightclub in West Hollywood, California, with Levine performing vocals and guitar. The band was discovered while they were performing in Malibu by independent producer Tommy Allen, who along with his partner John DeNicola, had them record an 11-track album. Owing to a string of industry showcases in Los Angeles, they were signed on to Reprise Records through producer Rob Cavallo.

In August 1997, the band released their first album, titled The Fourth World and also appeared on an episode of the drama series Beverly Hills, 90210. Despite high expectations, it had little success, selling about 5,000 copies. Reprise decided to drop the band after Cavallo's exit from the label. Disappointed with the results of their album, the band broke up. Later, Levine would say of the experience: "Kara's Flowers was just floating up the wall beneath the sticks. Make a record quickly, put it out. No touring base, no nothing. Just try to make it happen right out of the gate and it just doesn't work".

After the break up of Kara's Flowers, Levine, along with Carmichael, left Los Angeles to pursue higher studies at Five Towns College in New York. On MTV News, in 2002, he said: "That's when I started waking up to the whole hip-hop, R&B thing. We had friends named Chaos and Shit. It was not Brentwood High". They dropped out after a semester, and reunited with Madden and Dusick to form a band once more. They experimented with several styles, including country and folk, before deciding groove-based music would become their genre. Levine explained the need for a makeover for the band: "We were just so sick of being a typical rock 'n' roll band ... I felt like I needed to look elsewhere for vocal inspiration." The band put together a demo that was rejected by several labels, before it caught the attention of Octone Records executives James Diener, Ben Berkman, and David Boxenbaum. Following Berkman's advice, the band added a fifth member, James Valentine, and was renamed Maroon 5. In an interview with HitQuarters, Berkman explained that Levine "seemed to be a very shy, shoe-gazing type ... a fifth member could play the guitar to free up the singer, so he could be the star I perceived him to be".

Around this time, Levine had been working as a writer's assistant on the CBS television show Judging Amy; the program's producer Barbara Hall was his family friend. While on the show, he would spend time writing songs about his ex-girlfriend. These songs were put into Maroon 5's debut album Songs About Jane, which was released in June 2002. The album slowly gained airplay, and eventually became a sleeper hit, selling an estimated 10 million copies and becoming the tenth best-selling album of 2004, two years after its release. In 2005, Maroon 5 won their first Grammy Award, for Best New Artist. The next year, they won the Grammy Award for Best Pop Performance by a Duo or Group with Vocals for the second Songs About Jane single "This Love".

By 2006, the band began recording again, and in May 2007, Maroon 5's second album It Won't Be Soon Before Long was released. Levine described the album as "a vast improvement", explaining: "I think this record is a little more self-confident and powerful lyrically". To support the album, the band performed on a ten-date club tour in which visited small venues in Europe and the United States from April to June 2007. The album and its lead, third and penultimate singles ("Makes Me Wonder", "Won't Go Home Without You" and "If I Never See Your Face Again", respectively) each received Grammy nominations, although only "Makes Me Wonder" secured a win.

After winding down from a world tour in support of It Won't Be Soon Before Long, the band began recording in Switzerland in 2009, in collaboration with record producer and songwriter Robert John "Mutt" Lange. Levine said Lange "worked me harder than anyone ever has". In 2010, Maroon 5 released their third studio album, Hands All Over. The album did not initially meet expectations. In an interview with Los Angeles Times, Levine explained that the album suffered from being "all these disparate ideas and songs that didn't make any sense together". After the moderate success of the album's first three singles, the band released "Moves like Jagger" which Levine classified as "one of those songs that was definitely a risk; it's a bold statement". The single became a worldwide success; it was the ninth-best-selling digital single of 2011 with sales of 8.5 million copies and, as of 2012, the eighth-best-selling digital single of all time. Levine later credited the song with "totally reviving the band".

Since "Moves Like Jagger" was the first time Maroon 5 had collaborated with an outside writer, the band decided to attempt it again on their next album, entitled Overexposed. Its title is supposedly an allusion to Levine's public ubiquity. In an interview with Rolling Stone, he opined that is their most dance-driven album ever, commenting: "It's very much an old-fashioned disco tune. I have a love/hate relationship with it – but mostly I love it". The album and its lead single "Payphone" gave Maroon 5 their second Grammy Award for Best Pop Vocal Album and Best Pop Duo/Group Performance nominations. In support of Overexposed, the band conducted the Overexposed Tour from 2012 to 2013 (with the European leg extending to 2014 due to scheduling conflicts), and also headlined the 2013 Honda Civic Tour, which included The Voice contestant Tony Lucca.

In 2014, Maroon 5 continued their collaboration with Ryan Tedder, Max Martin and others to release their fifth studio album V (pronounced: "five"). Levine acknowledged that they followed the same song-writing process that they tried with Overexposed, saying: "We developed a really nice system on the last record — we found songs we were passionate about, developed them and put our stamp on them ... this time we kept it going but looked for different types of songs." Five singles were released from it. In support of the album, the band undertook the Maroon V Tour, which kicked off with a show in Dallas in February 2015.

In 2007, Levine had stated that he believed Maroon 5 was reaching its peak and might make one more album before disbanding. He was quoted explaining: "Eventually I want to focus on being a completely different person because I don't know if I want to do this into my 40s and 50s and beyond". But in 2010, he dispelled any rumors of the band breaking up, saying:"I love what I do and think that, yes, it might be tiring and complicated at times we don't have any plans on disbanding any time soon". He has also turned down the idea of having a solo career, stating that "there will never be a solo record. I would sooner have another band". On February 10, 2017, Levine received a star on the Hollywood Walk of Fame for his contributions to the recording industry.
with social network
with social network