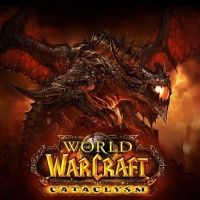 The Shattering
World of Warcraft: Cataclysm
Russell Brower
The central plot of the expansion is the return of the evil dragon aspect Deathwing the Destroyer (originally Neltharion the Earth Warder). Last seen in Warcraft II, which took place more than two decades earlier, Deathwing has spent that time healing himself, and plotting his fiery return from the elemental plane of Deepholm. His return tears through the dimensional barrier within Azeroth, causing a sweeping cataclysm that reshapes much of the world's surface. In the midst of the worldwide disaster comes renewed conflict between the Alliance and the Horde, which is now under the rule of Garrosh Hellscream. With the elemental realms now open to the world, chaotic elemental spirits and their tyrannical lords emerged to help the Destroyer and the nihilistic Twilight's Hammer cult bring about the Hour of Twilight: the end of all life on Azeroth.

The Cataclysm is responsible for a number of political changes within the Horde and Alliance. With the wake of the cataclysm, the Horde's leader, the orc shaman Thrall, stepped down from his duty as Warchief of the Horde to better help the world of Azeroth as a whole. This duty was relinquished to the former overlord of the Warsong Offensive, the Mag'har orc warrior Garrosh Hellscream. Looking for ways to gather more resources and new territory for his people, Hellscream has initiated several brutal strikes against the Alliance, using the cataclysm to the Horde's advantage. The human king Varian Wrynn deployed many of his forces to fight against Garrosh's aggression, storming the Southern Barrens and Stonetalon Mountains, while Garrosh, unlike Thrall, embraced war with the Alliance.