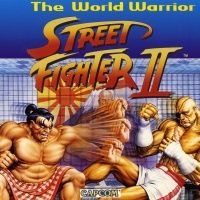 Guile's Theme
Street Fighter II
Yoko Shimomura
Street Fighter II follows several conventions and rules established by its 1987 predecessor Street Fighter. The player engages opponents in one-on-one close quarter combat in a series of best-two-out-of-three matches. The objective of each round is to deplete the opponent's vitality before the timer runs out. Both fighters having equal vitality left yields a "double KO" or "draw game" and additional rounds ensue until sudden death.

In the first Street Fighter II, a match can last up to ten rounds; this was reduced to four rounds since Champion Edition. If there is no clear winner by the end of the final round, either the computer-controlled opponent will win by default in a single-player match or both fighters will lose in a 2-player match. After every third match in the single-player mode, a bonus stage gives additional points including a car-breaking stage, a barrel breaking stage, and a drum-breaking stage. Between the matches, the next match location is selected on a world map.

Like in Street Fighter, the controls are an eight-directional joystick and six attack buttons. The joystick can jump, crouch, walk left and right, and block. A tradeoff of strength and speed are given by three punch buttons and three kick buttons, each of light, medium, and heavy. The player can perform a variety of basic moves in any position, including new grabbing and throwing attacks. Special moves are performed by combinations of directional and button-based commands.

Street Fighter II differs from its predecessor due to the selection of multiple playable characters, each with distinct fighting styles and special moves including combos. According to IGN, "the concept of combinations, linked attacks that can't be blocked when they're timed correctly, came about more or less by accident. Street Fighter II's designers didn't quite mean for it to happen, but players of the original game eventually found out that certain moves naturally flowed into other ones." This combo system was later adopted as a standard feature of fighting games and was expanded upon in this series.
with social network
with social network