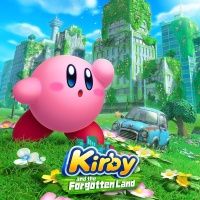 Kirby and the Forgotten Land

Dazzling Treasures
Kirby and the Forgotten Land
Hiroyuki Sawano
Kirby and the Forgotten Land is the first platform game in the series with full 3D gameplay, where the player must guide Kirby through various different stages to save the Waddle Dees at the end. As in most Kirby games, Kirby can jump and slide as well as inhale enemies and objects which he can either spit out like projectiles or swallow to gain a copy ability. Alongside returning copy abilities, this game introduced two new copy abilities in the form of Drill and Ranger, as well as an upgrade system for copy abilities and a new "Mouthful Mode" where Kirby can swallow and control larger objects, such as cars and vending machines. Similar to Kirby Battle Royale and Kirby and the Rainbow Curse, a second player can join in and play as Bandana Waddle Dee, who uses a spear as his main form of attack.

The goal of each stage is to rescue the Waddle Dees, who are freed by finding them trapped in cages, as well as by accomplishing certain goals specific to each stage. Once rescued, they are returned to Waddle Dee Town, the main hub of the game. As the player rescues more Waddle Dees, the town size increases as well as unlocks minigames that the player can compete with others online for the top score. The game also supports Amiibo functionality.
with social network
with social network