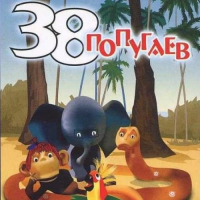 The series was created by director Ivan Ufimtsev and artist Leonid Shvartsman from a script by famous children's writer Grigory Oster. The name comes from the first series, in which the length of the Boa was measured in elephants, monkeys, and parrots. In most episodes, the animals solve some amusing paradox involving different meanings of concepts or wordplay: they physically "say hello," "commit closure," and the like.