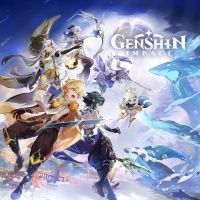 Arataki Itto: Make Way for the One and Oni!
Genshin Impact
Yu-Peng Chen

Ode to Azhdaha
Genshin Impact
Yu-Peng Chen
Pages: 1 2 3 4 5 ... 10 Next
Genshin Impact takes place in the world of Teyvat, and is composed of the seven major nations of Mondstadt, Liyue, Inazuma, Sumeru, Fontaine, Natlan, and Snezhnaya; each nation is ruled by a different god. The mysterious floating island of Celestia is allegedly home to gods and mortals who have ascended to godhood through great, heroic feats. Underground lie the ruins of the nation of Khaenri'ah which was destroyed by gods 500 years before the events of the game. Unlike the seven major nations, Khaenri'ah was not ruled over by a god. The player character, the Traveler (male or female depending on the player's choice), is separated from their twin and becomes trapped in Teyvat. They are joined by a companion, Paimon, as they journey through Teyvat in search of their lost sibling. Although players can choose the name they want to be referred by, the Traveler's sibling refers to the Traveler by either Aether or Lumine, if the Traveler is male or female, respectively.

Each nation is associated with and worships one of The Seven, a group of gods known as the "Archons", who each preside over one of the seven nations. Each member of The Seven is tied to one of the game's elements, and is also reflected in their nation's aspect. Barbatos, Rex Lapis, the Raiden Shogun and the Tsaritsa are the Archons of Mondstadt, Liyue, Inazuma and Snezhnaya, respectively. However, the god who is the Archon may change over time as Archons pass away. Specific individuals chosen by the Archons are granted a Vision—magical gemstones that give their bearers the ability to command an element and the potential to ascend to godhood and reside in Celestia.

Mondstadt, the city of freedom, worships the Anemo Archon Barbatos and sits on an island in the middle of a lake. The city is protected by the Knights of Favonius, who are tasked with protecting Mondstadt and its citizens. To the southwest, Liyue worships the Geo Archon Rex Lapis (also known as Morax) and is the largest market harbor in Teyvat. The harbor city is presided over by the Liyue Qixing, a group of business leaders, and ancient guardians known as Adepti, a class of magical beings that includes Rex Lapis himself. Across the sea to the southeast lies the isolationist island nation of Inazuma, overseen by the authoritarian regime of the Raiden Shogun (also known as Baal) and three governmental bodies that together make up the Tri-Commission: the Tenryou Commission, Kanjou Commission, and Yashiro Commission; overseeing military and executive affairs, finances and foreign affairs, and ceremonial affairs respectively.

Snezhnaya, ruled by the Cryo Archon known as the Tsaritsa, sends out diplomats named the Fatui who maintain a friendly appearance while using more underhanded methods secretly. The Fatui are also led by the Eleven Harbingers, individuals given extraordinary powers and executive authority by the Tsaritsa. In addition to the Fatui, another antagonistic faction in the game is the Abyss Order, a legion of monsters that declares themselves to be enemies to all of humanity. They are led by the "Prince" or "Princess", the lost sibling of the Traveler.
with social network
with social network