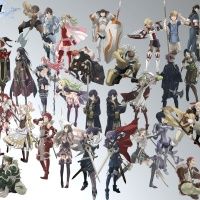 Fire Emblem Main Theme
Fire Emblem
Yuki Hayashi
The Fire Emblem games take place across multiple unrelated settings within a Medieval or Renaissance-themed time period, with the main protagonist, being either royalty or a mercenary, caught in the conflict of two or more countries across a continent and fighting for their cause. The continents of Archanea and Valentia are the settings of Shadow Dragon and the Blade of Light, Gaiden, Mystery of the Emblem, and Awakening, and the planned setting for Fire Emblem 64. Genealogy of the Holy War and Thracia 776 are set in Jugdral, distantly connected with Archanea and Valentia, while The Blazing Blade and The Binding Blade take place in Elibe. The Sacred Stones is set in Magvel and Path of Radiance and Radiant Dawn are set on the continent Tellius. Fates is set on an unnamed continent, with the story instead focusing on the two powers fighting over its territory. Three Houses takes place on the continent of Fódlan.

A recurring element in the series is the titular artifact known as the "Fire Emblem". In Shadow Dragon and the Blade of Light and other games set in Archanea, it is a shield inset with five magical gems. Its name derives from its connection to dragons and weapons of war, being the "emblem of flame". It also appears as a family crest in Genealogy of the Holy War, a family seal in the world of The Binding Blade, a magic gemstone in The Sacred Stones, a bronze medallion holding a goddess of chaos in Path of Radiance and Radiant Dawn, a sword in Fates, and hereditary magical sigils in Three Houses. Other magical elements, including feuding gods and mystical species such as dragons and shapeshifters, are also recurring elements in the series.
with social network
with social network